***All posted reports are from either the facebook or twitter pages, text/emails/calls received and police scanner. Due to the shear volume of information time may not allow credit as to where each report came from***

Pictures from the noon hour. First is Broadstone Road in Valle Crucis, next is 105 toward Boone, third is 105 in Boone. 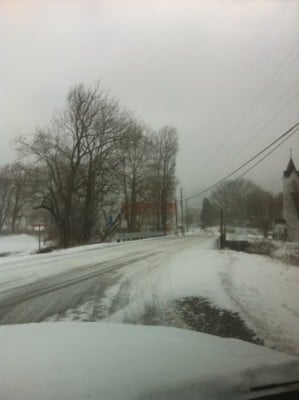 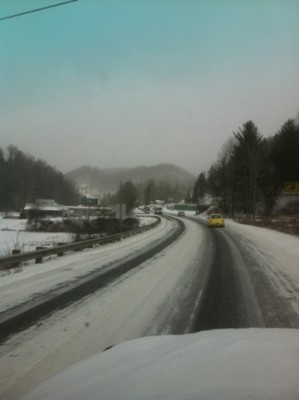 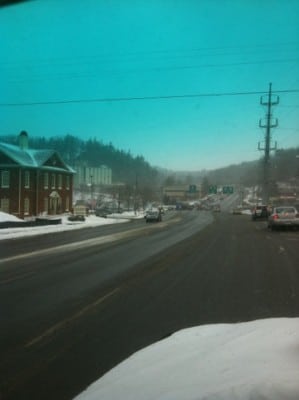 10:27am – ‎5″ in Matney, Roads are Very bad in Matney/Valle Crucis. Hwy 914 between Valle Crucis and Banner Elk is extrememly slick and there has been one vehicle off the mountain this morning traveling down Hwy 194. Very Slick!

10:27am – ‎321 from Johnson City to Boone: Dry in JC, light slush through Hampton, some slush/packed blowing around the lake to the border – sanding is pretty spotty with some slick spots as you near the state line. Better just across the border, but the sand's covered with blowing snow and some downhills are slick. Not bad from Bethel turn to 421 intersection, and from there to downtown Boone it's mostly slushy/packed blowing snow.

9:23am – The intersection at Baird's creek rd and 105 south is blocked with cars stuck on the guard rail.

9:20am – cars on Niley Cook Road being turned around due to slick curve

9:11am – from facebook “Junaluska Road is awful, don't travel it unless you must, or at least until it gets scraped. Just had to be pulled out of the ditch!”

9:04am – ‎105 up from Broadstone: snow blowing around, but traction decent. Wind is the biggest hazard, that and other people. Take it easy, folks.

9am – 105 & the extension are terrible! Blowing snow has covered all the lane markers & creating near white out conditions!

8:56am – Roads from town to Poplar Grove “okay but not so good” take your time!

8:43am – Snow covered roads from Pineola to Valle Crucis, with brief clearing through parts of Foscoe. Travel slowly and be aware of other drivers; you should be fine

8:25am – Howard Street to campus is very slippery, avoid it.

8:20am – from facebook page – “Drove from Mountain City to Boone this morning.. the roads are NOT nice…”

8:15am – Niley Cook Road is extremely slick, even in 4 wheel drive, low

7:51am – from facebook “Traffic 421 traveling from Boone towards Tennessee is moving very slowly. My Mom has been traveling about 5mph all the way from Boone.”

7:30am updates – Drive in from New/Old 421 was okay on 421. Tracks are decent. Bamboo is covered. Wilson's Ridge has been sanded/salted but recommend caution if you are only 2-wheel drive. Deerfield was fine through the S-bends was fine. Bamboo by the airport lightly covered.

– drove into Boone from Blowing Rock, roads are covered and wind blowing “white out condition at times

– Coming in from the Deerfield Estates/Deerfield Forrest area, roads are icy in patches with the wind blowing most of the snow off the road until you get to the airport Bamboo/Deerfield Rd. intersection. There the roads become snow covered and slick. Snow is blowing with occasional “white out” moments. The ladies coming in to our office (near the hospital) from the western part of the county say the snow is covering much of the roads, specifically 105/105 bypass.

6:37am – roads in downtown Boone have become snow covered again

*Updated 6:25am – Watauga Campus of Caldwell Community College is now CLOSED for the day.

6:05am – hwy 194 from Todd to Boone reported as totally white but drive able even with a two-wheel drive vehicle

6am – via twitter – “looks like most roads in town are at least partially covered this morning. Side roads are totally covered.”

6am – from facebook – “Drive from TN. line to 105 bypass was not bad. roads were lightly dusted”

5:42am – road reports are coming in slowly, due in large part to the lack of traffic in the area due to Watauga schools still not back in session

5:28am – roads in downtown Boone are still snow covered but the travel lanes are melted

5am – Roads in downtown Boone are snow covered but drive-able, crews are working on them now

Overnight most, if not all roads, across the entire High Country are now snow covered and slick. Below is some of the information that came in through the overnight.