A pioneer in the agricultural field, both locally and nationally, passed away Friday afternoon.

Shipley was an influential educator in Watauga, and the region, spanning 44 years in teaching agricultural. A career farmer, he spent more than 80 years raising cattle, tobacco, livestock and other crops.

In a July 12 article, Sherrie Norris of the Watauga Democrat noted Mr. Shipley's accomplishments and awards:

Graduated college in 1933 with a bachelor’s degree in animal husbandry.

Began his teaching career in vocational agriculture at the Patterson School, assisted with the school’s 1,300-acre farm and oversaw the dairy operations.

In 1934 he transferred to Boone High School, which became Appalachian High, where he started the first agriculture program.

In 1940, he received his master’s degree in agriculture from Ohio State University and accepted work as an agriculture extension agent in Grayson County, Va.,where he met Agnes Davis. They married in 1942.

In 1943, Shipley entered the Air Force, served as a gunnery instructor on a B-24 bomber and was later assigned to the first hydroponics detachment in the South Atlantic’s Ascension Island.

Upon discharge, Shipley accepted a temporary teaching position in Cove Creek, teaching vocational agriculture; after consolidation, he retired from Watauga High in 1977.

He also conducted a veteran’s farm training program at the school two nights a week, with, at one time, 120 men enrolled and six instructors.

Shipley was also an expert in sheep, having raised and showed them and taught sheep shearing. He led three students to win national shearing contests and served multiple terms as president of the N.C. Sheep Producers Association. He operated a sheep dipping business for many years to help local sheep breeders control parasites.

A  Grange member for many years, helping launch the local chapter, and was honored in 1998 by the N.C. Grange with the Grange Community Award.

A longtime member of Watauga Farm Bureau board, Shipley served as president and state delegate to multiple national conventions.

He raised burley tobacco and served many years on the board of directors for the Burley Stabilization Corporation for North Carolina, Virginia and Tennessee. He chaired the N.C. Tobacco Growers and the county and community committee of the Farm Service Agency and served on the board for the Council of Burley Tobacco, Lexington, Ky.

In 2007, the couple was honored at the Watauga County Farm City’s 50th anniversary with the establishment of the Robert and Agnes Shipley Foundation. 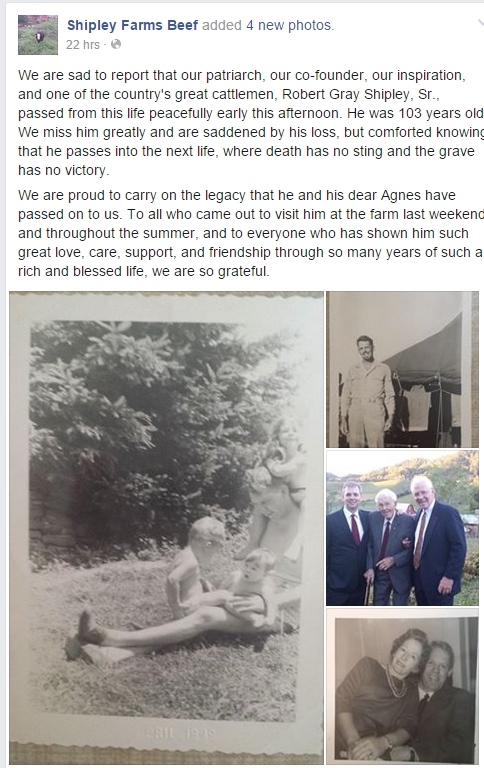 Robert Gray Shipley, Sr., 103, agricultural and educational leader, of Vilas, NC passed away peacefully on August 14, 2015 surrounded by family. Mr. Shipley was born June 23, 1912 in Valle Crucis, NC. He spent his youth in Valle Crucis and in Wallace, VA.

In 1929 he entered Virginia Polytechnic Institute (Virginia Tech), working his way through college and graduating in 1933 with a Bachelor’s Degree in Dairy Science. He began a 44-year career teaching vocational agriculture, as well as a career in farming that spanned more than 80 years of raising cattle, tobacco, and other livestock and crops. In 1940, he received his Master’s Degree in Animal Husbandry from Ohio State University and accepted work as an agriculture extension agent in Grayson County, VA., where he met the love of his life, Agnes Davis. They married in 1942. In 1943, Robert entered the Army Air Corps, serving as a gunnery instructor and with a hydroponics detachment on Ascension Island. Following World War II, Agnes and Robert reared three children on the family farm in Vilas.

His social conscience, passion for education, generous spirit, and servant leadership led to his participation in and recognition from numerous local and national professional, civic and church organizations. He was a strong steward for God’s earth, animals, crops, and flowers, as well as family, community, and church. Each of these has benefited from his strong grip and sound guidance. Many former students, grandchildren and colleagues will long remember the warm grip of his large hand, his sage counsel, good humor, and wise sayings. His efforts to help students of all ages succeed, in both the classroom and life, will be one of his enduring legacies.

Visitation will be held Friday, August 21, 2015 at Hampton Funeral Service in Boone from 6 to 8 pm. The funeral will be Saturday, August 22, 2015 at 1 pm at Henson’s Chapel United Methodist Church, 120 Henson Hollar Road, Vilas, NC 28692. Officiating will be Reverend Katherine Cornell. Military graveside rites and burial, provided by the United States Army and American Legion Post 130, will follow in Cove Creek Baptist Church Cemetery.

Online condolences may be sent to the Shipley family at www.hamptonfuneralnc.com.

Hampton Funeral and Cremations Service is in charge of the arrangements. 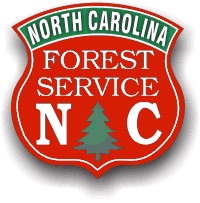