*A running and updated list of conditions across the High Country*

4:38am – Overnight snow fell across the area, as winds picked up and some power outages were reported. “Winds picked up in Blowing Rock at the ten o clock hour” Greg reported on the facebook page. Karen posted that power went out at about 2am in Foscoe near Grandfather Mountain Campground, and was out for almost an hour.

A little earlier at 9:53pm on Thursday night Molly posted that “Snowing/sleeting on Junaluska Rd….sure is coming down and sticking too! Deck is covered within 5 minutes!”

Several overnight power outages left area residents in the dark. A twitter report that came in from around 3am “Power outages increasing in mountains and 39% of peeps in Avery County have no power. Much along watauga/Avery line”

As of 4:53am there were 273 Blue Ridge Electric customers without power in Ashe County, 64 in Watauga, 10 in Avery.

Wind are continued to gusts up to 65 mph for most of the area today, with the higher gust starting this afternoon. So far as of 4:55am the peak gust at Watauga Medical Center's reporting station was 61 mph at 3:15am, followed by gust of 58 at 3:55am and 52 at 1:35am.

The area did get some snowfall, mostly an inch or maybe a little a more. Roads at this time are not a problem, at least per any reports coming into facebook and twitter as of 5am.

5:25am – Here's two maps from Brad Panovich about what to expect regarding snowfall for the High Country. The maps are for 36 hours from just before midnight on Thursday night. Click on them for a larger view. 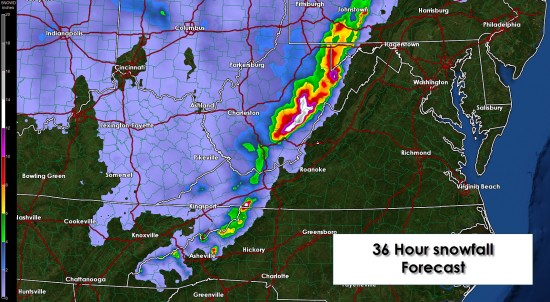 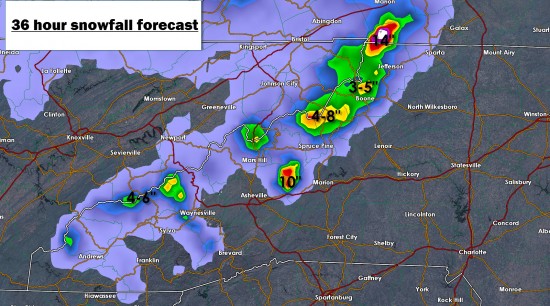 5:47am – Johnson County TN schools are closed today. Watauga schools are already out for the holidays.

6:12am – Two Rivers Community School will be closed to staff and students

6:27am – scanner report of tree blocking the road on Chestnut Grove Road, and another on Howard's Creek Road.

6:31am – Per Watauga County Communications “Report that Howards Creek Rd has a tree across it at Jake miller Rd. Now another report of tree across Chestnut Grove Rd between 194 and Cobbs Creek Rd.”

6:36am – report coming in “Wilson's Ridge is a little slick. Use caution on the hill. Parts of Bamboo from 421 to WR also have snow. Tricky because roads go from clear to snow pack and back almost instantly and without warning.”

6:38am – report “Road sign in the road on 194 passed Jeffs Plumbing going towards Meat Camp”

6:42am – scanner report Howard's Creek at Jake Miller Rd is back open per tree down.

6:57am via twitter to @wataugaroads “105 covered, front wheel drive light sedan made it up fine!”

7am – You may find some slick spots but by and large roads are ok this morning so far. Couple reports of trees down in roads but DOT has taken care of those real quick. Winds continue to gust over 50mph and will pick up at the days goes along.

7:24am – might be slowing going on Blowing Rock Road at Shadowline intersection, scanner report of wreck with tractor-trailer and a vehicle.

7:30am – Pic of the snow on the ASU campus from ASU Weather Cam facebook page 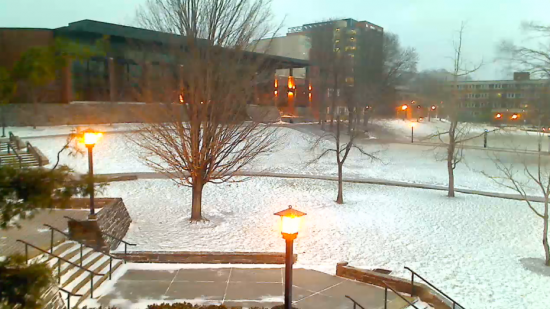 8am – per more reports coming in roads have gotten worse over the last hour. They are still passable but more snowfall and high winds are starting to impact more routes. Use caution.

8:33am – The view in Western Watauga County from Deej Cornett 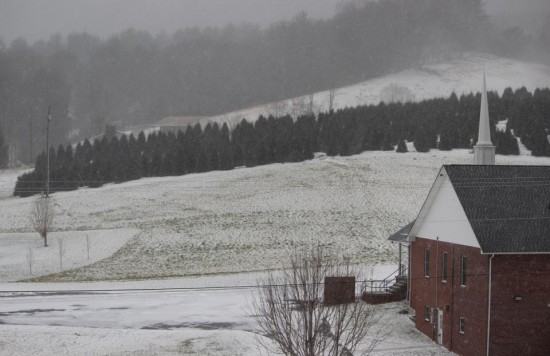 ‎8:49am – roads continue to be slick this morning, they have gotten worse since earlier this morning. Also still some scattered power outages: Ashe 19, Watauga 32

9:04am – From Watauga County Communications
US Hwy 321 S at Blackberry Condos reported to be very slick on in to Blowing Rock. A Caldwell county unit responding to stranded motorists near Green Park Inn had to turn around due to road conditions. 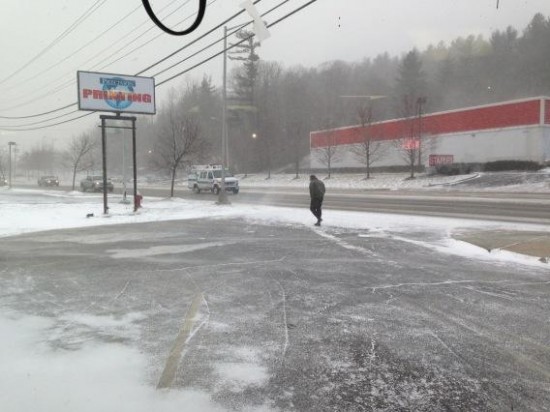 9:12am – per scanner reports Niley Cook Road is a MESS. Two different wrecks on that road in two different places right now.

9:30am – roads are slick all across the area now. EMS officials are being dispatched to several more wrecks in Watauga right now. Use caution if you are out.

9:33am per Boone PD twitter feed – @boonepolice: Driving conditions are treacherous this morning. If at all possible stay at home. #boone

Niley Cook Road is a parking lot. Photo from Curly Stumb at 9:47am. 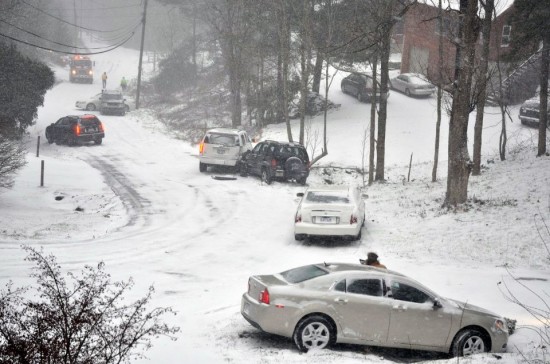 10am – roads continue to be bad. EMS continue to be dispatched to wrecks and/or downed trees. Very strong wind gust and blowing snow continue and will all through the day. Use caution.

The view from Blowing Rock from Courtney Pearce at 10am 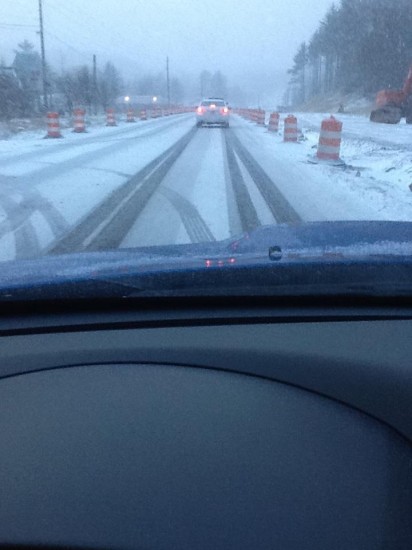 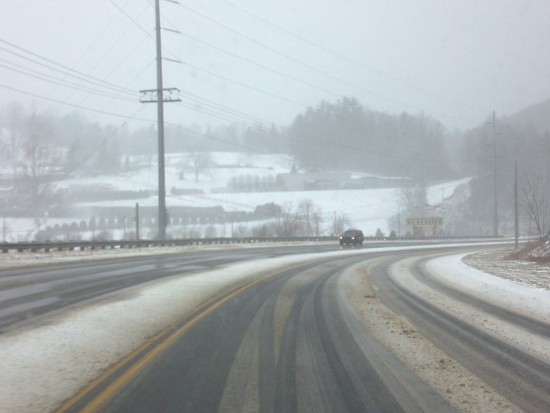 11:12am – power outages are down to single digits for now – Ashe 7, Watauga 7. Strong gust continue most of the weekend. If your power goes out be sure to report it to Blue Ridge Electric Membership Corporation by calling 1-800-448-2383.

11:30am – the view in downtown Boone from Zach Seifts 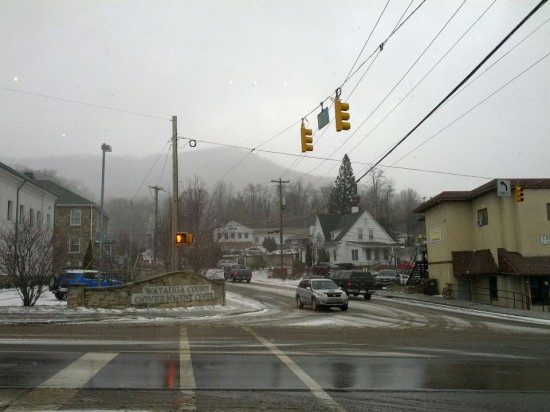 12noon – the number of accident calls has decreased per scanner traffic. Area motorist are still advised to use caution as blowing snow and high winds will impact travel the rest of the day. 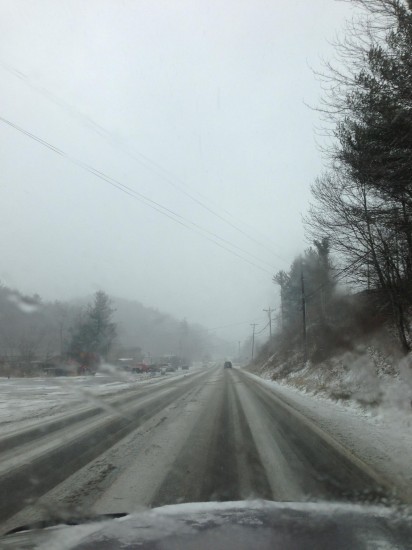 1:03pm – Per Boone PD – We are having reports of several fender benders. The roadways are still snow covered please use caution & slow down if you are traveling. 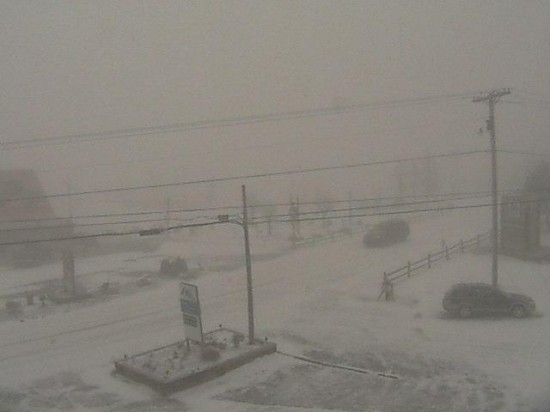 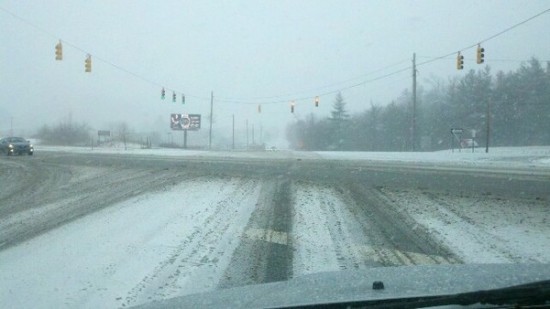 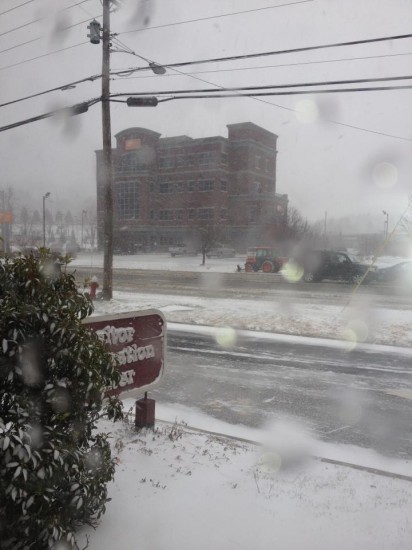 3:06pm – expect delays on 194 near DOT offices, wreck in the curve per scanner 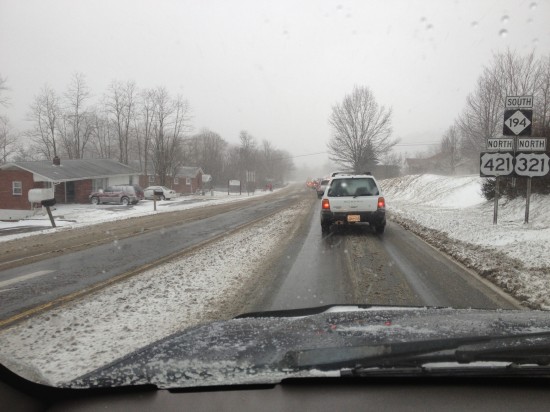 3:30pm – Most if not all roads are snow covered (some totally, some partly). EMS is starting to get more calls about wrecks now (just like this morning). If you have to travel allowed plenty of extra time and slow down. High winds and blowing snow will continue rest of today and tonight.

3:39pm – via twitter – the route from Mountain City, TN to Boone, NC is barely passable without a 4wd/awd! Roads are really slick!!!

5:15pm – High Wind Warning remains in effect until 6pm Saturday, Winter Weather Advisory is now in effect until 7am Saturday. Snow tampers off overnight but the high winds continue til Sunday.

5:15pm – use caution traveling tonight and through the overnight as the winds continue to gust over 50mph. Just like the 3:30pm update most if not all roads are snow covered (some totally, some partly).If you have to travel allowed plenty of extra time and slow down.

6:40pm – updates posted as may be needed if there are large power outages. Still scattered outages, also several reports to local fire departments of trees down mainly in the western end of the county. They are responding to those calls. Watch for slick roadways and continued high winds tonight.

8:27pm – power outages: Ashe 101 , Watauga 278, Avery 1, Caldwell 1. Also getting report that power is out at Tynecastle in Banner Elk which is in the Mountain Electric service area.

8:31pm – scanner report of tree on a power line in the area of Popular Hill and Horseshoe in Boone. Power is reported out in that area.

8:48pm – if you are traveling tonight be EXTREMELY careful, the scanner is full of reports of trees down.

10pm – tree reported down on Ward's Branch Road blocking both lanes per scanner.

10:07pm – local fire depts continue to be dispatched to trees down across the roads and across power lines. USE CAUTION if you are gonna travel tonight and early tomorrow morning.

10:18pm – scanner report of tree down on State Farm Road in Boone, no power in that area.

10:29pm – report of tree down on Poplar Grove Rd at the church blocking traffic both ways. Also power is out in parts of Boone due to down tree on State Farm Rd.

10:45pm per a dispatcher with Boone PD “We are getting multiple calls at Boone Police Dept about downed trees and downed power lines. Roads are slick and snow covered, there are periods of near white out conditions due to the blowing snow and the wind chills are near zero. Please stay indoors and do not travel unless absolutely necessary. If you must travel, do so SLOWLY and CAUTIOUSLY. If you encounter a downed power line, do not approach it and NEVER attempt to drive over it. Please be safe out there tonight.”

10:51pm – Fire Depts and other EMS continue to respond to numerous trees down all across the county.

9th Year Anniversary noted of the passing of Watauga County Deputy William Mast Jr, Killed in the Line of Duty