Watauga County is mourning the loss of Watauga High School teacher/coach Leigh Cooper Wallace. Wallace passed away Monday at Johnson City Medical Center after being airlifted there over the weekend due to pneumonia. She was 43 years old.

Many area residents knew her as either a current teacher and coach at Watauga High or as tremendous cross country/running athlete. A far different situation made her a role model for many women in the area.

In September of 1989 Wallace (maiden name Cooper at that time) was the sole survivor of two attacks by Daniel Lee. Lee attacked, raped and killed Jenni Gray (then a reporter for the Watauga Democrat) before coming across Wallace running beside a county road. Lee proceeded to rape and torment Wallace over the course of several hours. Wallace managed to escape and in 2009 told Endurance Magazine “At the trial, as Leigh testified, she intentionally stared her tormentor in the eyes, her proof to him and herself that she wasn't weaker because of this experience but was much stronger.”

She is survived by her husband Chris and two children Jake and Haleigh. The visitation for Leigh Wallace will be Wednesday (Dec 19) from 5:00 PM until 8:00 PM. The funeral will be Thursday afternoon (Dec 20) at 3:00 PM. Both of these will be held in the gymnasium at Watauga High.

This is the memorial that was set up in Watauga High on Dec 18 for Leigh Wallace. Photo courtesy of Rebekkah Moody. 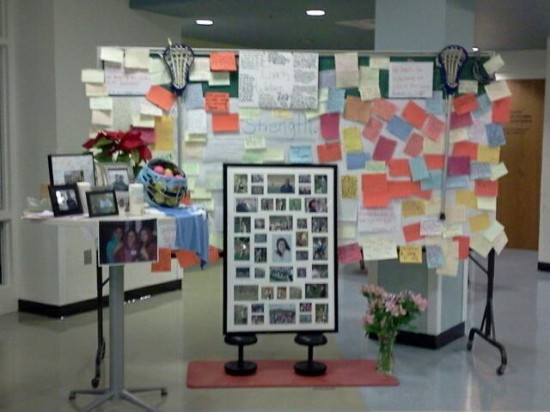 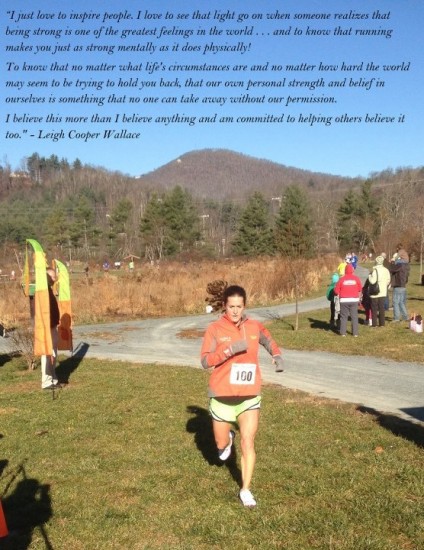 Below is an article from Endurance Magazine from April 27, 2009. Written by Molly Barker, Founder of Girls on the Run International. Special thanks to Joe Nuss, Managing Editor of Endurance Magazine, for permission in reprinting that article:

I am a woman, I am a runner. Much of my experience being a woman has overlapped with the power I get from being a runner. When I run I feel beautiful, powerful, and real. The pieces of myself that I share throughout the day are all assimilated back into one beautiful tapestry . . . one amazing piece of reality . . . one experience that is mine and mine alone. The physicality of it provides me with a powerful reminder that my body is capable, strong, powerful, and MINE. Every time I run, I make a statement to the world, “I own my action, my body, my thoughts, and my experiences. I am not an object to be sexualized, diminished, or dominated. I am real. I am human. I am spirit manifest within this strong, healthy, and beautiful physical body. Honor that which rests within me.”

And this is where Leigh's story hits me.

Over the course of two days, women from across the nation descend on Charlotte for a two-day, very intense Girls on the Run training. Participants take back tangible tools and systems to efficiently deliver the Girls on the Run program. What remains with me are their stories. Frequently wrapped into and around a woman's story are her struggles in battling our culture's obsession with bodies, sexuality, and power.

I've got to be honest with you, when I met Leigh I was intimidated by her. Her physical strength is obvious. She is one of the strongest-looking females I've ever met. Her energy, though, was a bit reserved. She was probably intimidated by my extroversion and wide-open persona. We had a kind of mutual intimidation society, if you will: me of her physical presence and she, of my emotional one.

After a day together, Leigh e-mailed me her story.

As a little girl, Leigh was tough. In her words, “I was the athletic girl in my grade and this made me popular with the boys. I knew that they respected my athletic ability and my power and I really liked that. I didn't feel pretty, but I guess I probably thought I was cute in a way. I didn't see myself as a tomboy but I did relate well to boys and worked very hard to prove to them that even though I was a girl, I could still do most of what they could do.”

But something happened around middle school. Like many girls, Leigh stepped into the Girl Box, a place girls often go around sixth grade with heartbreaking results. At this vulnerable age, the formerly vibrant and strong Leigh began to morph into a girl overly occupied by her appearance. First it showed up as restricting her food intake, then it appeared as overindulgence. There seemed to be no end to the madness, yet running was the one safe space in the day where Leigh felt some degree of control. She won championship races in ninth and tenth grade and got third her senior year in the Kansas State Championships.

Appalachian State came knocking at her door. The move to Boone brought with it an opportunity to buckle down, focus on her love for running, and get on track with her eating. With a renewed sense of self and a desire for comfort in her skin, Leigh appeared on the ASU campus.

But changing locations didn't prove to be the remedy she had hoped. With her continued obsession with weight, Leigh was sidelined by stress fractures and distracted by her roller-coaster relationship with the scales. Her first year at ASU certainly didn't shake out to be what she had hoped.

And then IT happened.

September 29, 1989, Leigh set out on an early evening run. Planning to be back by 6:30, she and her boyfriend (now husband) would then go out for a nice dinner together.

A light rain began to fall when the car slowly approached. A very scary man sat at the wheel. “Get in,” he demanded, pointing to the passenger seat with his gun. Not knowing what to do, Leigh agreed.

What occurred over the next several hours is unthinkable. He drove Leigh to a remote area outside of Boone. With a frightening and disturbing sense of calm and coolness, he raped her while psychologically tormenting her with threats of death. At first, before the numbness set in, all she could think about was how loved she was. “My mother will miss me when I die,” she thought. A strange sense of gratitude seemed to float down upon her shoulders, as the violence raged around her . . . an overwhelming and gentle gratitude for her body, her friends, her family, and her life.

Hour after hour, the torment continued. Somewhere over the course of that time frame, Daniel Lee shared with her that he had murdered another girl, Jeni Gray. He calmly described her slow, cruel, and painful death and threatened to do the same to Leigh.

Leigh managed to escape from Daniel Lee hours later at a gas station. At the trial, as Leigh testified, she intentionally stared her tormenter in the eyes, her proof to him and herself that she wasn't weaker because of this experience but was much stronger. Daniel Lee received the death penalty for murdering Jeni Gray. He died in prison, several years later, from a brain aneurysm.

After the kidnapping, Leigh was stronger, indeed. She went on to become a 2-time Southern Conference All-Conference performer in cross-country. In track she was named the Southern Conference Most Outstanding Performer. Upon graduation, she continued to train on her own and compete. She won several state and regional races and ran her 5K PR of 16:56. She teaches and coaches at the high school level, leading many athletes to victory in the state championships. Now, Leigh is prepared to engage third, fourth, and fifth graders in the Girls on the Run program.

She is married with two children, wanting first and foremost to be remembered as a remarkable mother, not an elite runner. She is loved, respected, and embraced by her family, her community and at last, herself.

I share this with you because it's important that our culture honors women like Leigh-that we eliminate our antiquated ideals of beauty and recreate them to include the stories of women who are strong, brave, and authentic. As I read the story that she so openly shared with me, I wept, my head in my hands and my heart in my throat, wondering how I could possibly honor someone as brave, courageous, and bold as she. And as I write to you, I recognize that no words could ever do justice to the pain of her experience, nor the power she has gained from it. But what I can offer comes from Leigh herself.

“I don't know . . . I guess I just love to inspire people. I love to see that light go on when someone realizes that being strong is one of the greatest feelings in the world . . . and to know that running makes you just as strong mentally as it does physically! To know that no matter what life's circumstances are and no matter how hard the world may seem to be trying to hold you back, that our own personal strength and belief in ourselves is something that no one can take away without our permission. I believe this more than I believe anything and am committed to helping others believe it too.”

Leigh is, without a doubt, strength, beauty, and woman personified.

9th Year Anniversary noted of the passing of Watauga County Deputy William Mast Jr, Killed in the Line of Duty