It was the evening of July 6, 2013. Thousands of people had gathered in Appalachian State University’s Kidd Brewer football stadium for an outdoor fireworks concert headlined by popular country act The Band Perry. The event was billed as ‘rain or shine’. While the crowd was enjoying the opening act, it’s unlikely anyone noticed a small white object mounted on the south tower of the east side of the stands – but they were about to notice its impact.

As the opening act was concluding, lightning struck in the distance. But behind the scenes no one was caught by surprise, because the small white object was a high-tech, compact weather station directly integrated with an extremely accurate, detailed weather forecasting and decision-support system. University public safety and stadium officials had been using this technology to diligently monitor the approaching storms and were prepared to implement their action plan for lightning safety as soon as the integrated weather monitoring system alerted them to a lightning threat.

“When the lightning alert was issued, we used our evacuation plan to get everyone out of the stadium quickly and safely, and then get them back into the stadium as soon as the threat had passed,” says Appalachian State Senior Associate Athletic Director Rick Beasley. “Without this technology, we may not have been as aware of the danger as soon – or we may have kept people out of the stadium longer or canceled the show altogether. Using this technology we were able to keep everyone safe while still holding a successful event.”

Weather’s Impact on College Athletics
While this scenario occurred during an outdoor concert, university officials point out that it could have just as easily occurred during a home football game, when fans and students regularly pack the stadium to cheer on the popular and successful future Sun Belt Conference team. In fact, it’s a very real threat: lightning has proven to be a serious danger for college athletic events. According to a University of Colorado study, the areas of greatest lightning frequency in the United States are also where the vast majority of the country’s largest football stadiums are located. In addition to the physical danger lightning poses to large crowds, it also poses a risk of panic that can lead to issues like bottlenecks and trampling.

“Wet bulb globe temperature gives a much more accurate indication of heat stress on the human body than a heat index, because it takes into account many more factors including temperature, humidity, cloud cover and sun angle,” says certified meteorologist and Schneider Electric Executive Vice President Ron Sznaider. “Athletic trainers can use wet bulb readings to determine when to take precautions like moving or cancelling practice, adding extra rest times and hydration, or having ice towels, spray bottles and cold immersion tubs available.”

Weather also affects college athletics and universities in many other ways. Some events, such as baseball games, cannot occur during heavy rain. Knowing what the weather is going to be can also affect game plans and strategies in many sports. Irrigation and turf management require close monitoring of weather conditions. Even athletic facility managers can benefit from accurate weather forecasts to ensure buildings are heated and cooled efficiently. Occasionally, college sporting events have also been threatened by tornadoes; in 2005, a F2 tornado touched down within three miles of an Iowa State University home football game with 50,000 fans in attendance. 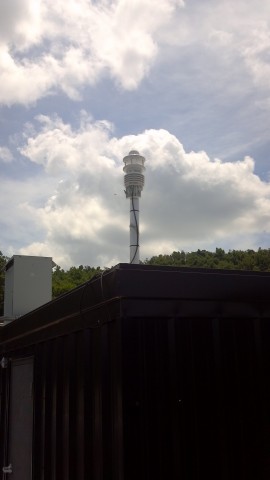 A Cutting-Edge Safety Solution
Along with the risks that severe weather poses to college athletic events and college campuses in general, Appalachian State has a unique set of challenges. Because the university is situated in the mountainous region of Boone, North Carolina it has its own microclimate; its weather conditions are often significantly different than those of nearby cities, and the topography of the region frequently results in poor visibility of weather and unconventional weather patterns.

“With the mountains in the way, you can’t see the storms coming – we don’t have that luxury,” says Appalachian State Assistant Athletics Director Douglas Justice. “Our football stadium is tucked into the mountain, and there’s a risk we could have more than 30,000 people at a football game and a storm could be upon us. To protect our students, athletes and fans we felt we needed to do something cutting-edge and different. We wanted a way to be sure we were never caught by surprise.”

In 2013, Appalachian State rolled out a first-of-its-kind weather forecasting, data collection and decision-support system designed to monitor and measure weather conditions at the university, forecast future weather specifically for the university, and alert university officials to severe weather risks.

The data collected by the Lufft weather station ties directly into the Schneider Electric Total View weather forecasting and decision support system. More than 14,000 customers – including many professional sports teams, sporting organizations, colleges and universities – use Schneider Electric forecasting services, and for good reason: the company’s weather forecasts have been ranked as the most accurate in North America by an independent third party (ForecastWatch) for six consecutive years.

“What is truly remarkable about the Appalachian State system is that the weather data collected by the Lufft weather station will be automatically integrated into our weather forecast system, which is an adaptive learning system,” says Sznaider. “That means that our forecast engine actively learns how to produce a more accurate forecast for the Appalachian State location and adapts to the nuances of that microclimate.”

The deployment of the Appalachian State weather system was completed in June 2013 under the guidance of Transportation Equipment & Services, which is also a management consultant for Schneider Electric. The integrated weather decision support system can be accessed via the Internet using either a computer or mobile device and includes continuous lightning monitoring and alerts, detailed radar, hour-by-hour location-specific forecasts and 24/7 access to a certified meteorologist for decision support.

Predicting Big Benefits
While Appalachian State officials see numerous benefits to this new weather technology, the most important is the safety of its students, athletes and spectators. “We have to ensure we’re making good decisions about when to get people out of the weather,” says Justice. “We have the policies and procedures in place, and now we have the most accurate information available for us to make the right decisions and back those decisions up, whether it’s evacuating the football stadium during a game because of lightning or cancelling classes because of freezing rain on the roads.”

Keeping athletes safe in the heat through wet bulb temperatures and forecasts is another major safety advantage. “We’re able to use the wet bulb temperature as an accurate guideline to determine when to add in protective measures to our practice like water breaks and ice towels,” says Appalachian State Head Football Athletic Trainer Justin Smith. “Taking those precautionary steps allows us to prevent heat illness from happening in the first place.”

In addition to safety benefits, athletic trainers predict the new integrated weather system may give their teams a competitive advantage – both in practice and on game day. “Missing even one afternoon of practice due to rain or lightning can really hurt our preparation, and you can’t just move a 150-man football team with no warning,” says Smith. “Having an accurate forecast well in advance and being able to view it on our smart phones allows us to easily adjust our practice schedule or move things inside so that we can always meet our goals for each practice.”

On game day, benefits of the new system include knowing when to warm up a pitcher during a rain delay, whether to prepare football plays for snowy conditions, and which end of the field to kick the football to at kickoff. “It does get windy at the top of our stadium, so I think it will be a big help,” says Smith.

The university community as a whole will also have access to the Appalachian State weather system for numerous additional uses. University officials will use it to determine whether to cancel classes due to weather conditions, facility managers can rely on the weather data to determine heating and cooling plans, grounds and maintenance crews will consult the forecast to determine mowing, planting and watering schedules, and faculty can incorporate the weather station and weather data into their coursework.

Ultimately, the new integrated weather station will advance the mission of Appalachian State University. “We strongly believe that it’s our responsibility to take care of everybody who attends our university or comes to an event here – we need to do everything we can to make sure they are safe,” says Beasley. “We call Appalachian State a family, and this is another tool that allows that to be true.”